“Nature has been part of my life since I was born,” Furtado said recently. “I didn’t realize it until recently when I thought about it.”

Furtado has not had much time in his 30-year career as an environmental activist to take a pause and think—until recently. The former director of Greenpeace Brazil spent a semester as a Visiting Scholar at Columbia University in New York City through the Lemann Fellowship program.

After arriving in New York City to begin his fellowship in August 2021, he found himself once again at the Bronx Botanical Gardens. The last time he was there was as a 6-year-old child. His father, an academic who was earning his Ph.D., had come to the US to study botany, and his mother had given birth to him in the Bronx. His family soon returned to Brazil, where his father became director of the São Paulo Botanical Garden. 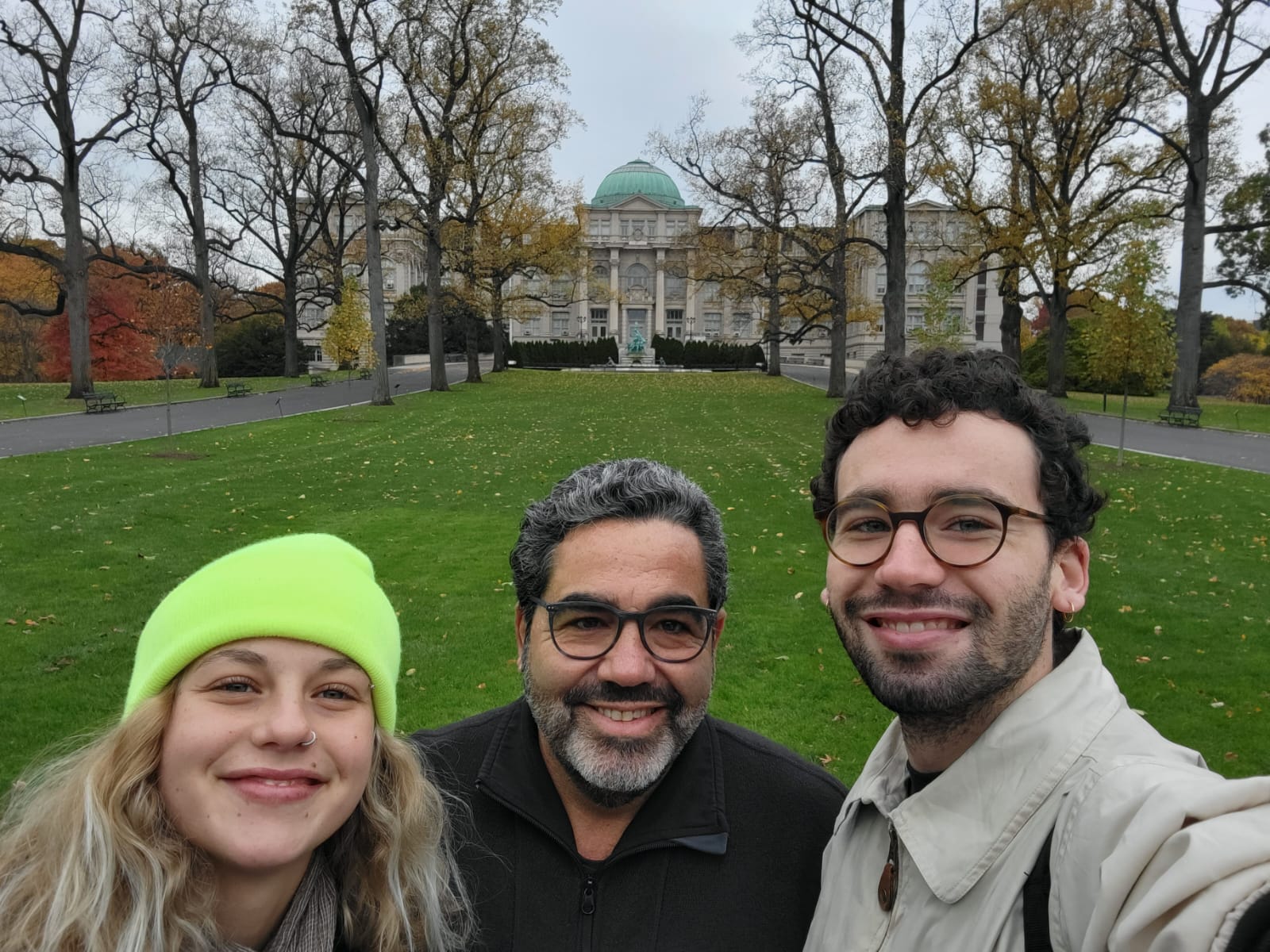 Furtado back to the Bronx Botanical Garden with his children in 2021.50-something years later, Furtado, back in the city of his birth, returned to the Bronx Botanical Garden on a visit with his two adult children. The three decided to walk all the way back to the Manhattan apartment he had rented for his fellowship. On the two-hour walk home, they walked through the varied ecosystems of the North and South Bronx, past Yankee Stadium, across the Hudson River, through Harlem’s famed Strivers Row, past the Apollo Theater, and finally back to the Morningside Heights apartment near the Columbia campus.

Furtado was reminded of the low-income neighborhood near the SP Botanical Gardens called Jabaquara. The neighborhoods he passed through on that NYC sojourn with his kids were similar. “These are the kinds of places where one would experience all the issues that today are key issues among discussion on climate justice—lack of public services, lack of education, lack of diversity, and all the other challenges you can imagine,” Furtado said.

But one belief he holds true is that people and the planet are not exclusive options. “I believe that jobs and income can be promoted while addressing the climate crisis,” Furtado said. “Sustainability, justice, and solidarity are possible in an economy that fosters sustainability,  prosperity, and innovation.”

The Road to Environmentalism
An engineer by training who was applying to attend an MBA program in the US, Furtado fell into his role as an environmentalist somewhat by accident. “During the application process, I decided to take a part-time job to improve my English. That job was at Greenpeace,” he said. “It turned out my English was so bad, I got fired the first day I started. But they decided to give me a second chance and I ended up joining the organization for 24 years.”

Furtado worked his way up from managing campaigns in the US to Latin America to global campaigns before he was asked to lead Greenpeace Brazil, where he worked on solutions to expand the renewable energy matrix and helped build agreements to address the impact of soy production and cattle ranching in the deforestation of the Amazon.

After turning 50, he decided it was time to change course. “I thought I should try something different because all I had done was Greenpeace,” Furtado said. “It would be nice to see how you can make a change in the world from a different perspective.”

The Breakfast Meeting
Furtado made his next foray into the philanthropy world as the Executive Director of Instituto Arapyaú de Educação e Desenvolvimento Sustentável, the family foundation of Guilherme Leal, a founder and shareholder of Natura & Co, Brazil’s largest beauty company and the world’s fourth-largest. The foundation funded primarily social-environmental causes with an education arm as well. It was in this position he became more well acquainted with the work of the Lemann Foundation and Jorge Paulo Lemann himself.

And because Furtado’s story seems to be one of coming full circle, this was not his first encounter with Lemann. Rewind to 2011 when Furtado was still at Greenpeace. He received an invitation to apply for the Yale World Fellow program at Yale University. It was a great opportunity to cross-pollinate his thinking with others from outside the field and he was selected as one of only 16 people around the world to attend.

The conversation with Lemann over breakfast started as an unlikely encounter between a businessperson running a family foundation with an environmental activist--and it ended with empathy.

It turns out Lemann, who had no involvement in the selection process, also didn’t know he was funding a Greenpeace leader until Yale informed him. Lemann told Furtado over breakfast, “We need for Yale to decide who they pick and we fund it. They’ve been doing that for 300 years and are much better at it than we would ever be if we selected the scholars.

“If they selected you, they must think you have value,” Lemann concluded. “If you have good people in the right places, you can change the world.”

And this story reflects a philosophy that Lemann has espoused throughout his business career that he has recounted in countless interviews: You build a successful company by investing in people--hiring the right people, investing in them, challenging them, and supporting them in their development. This belief also extends to the Lemann Foundation’s mission, which is that the most effective solutions to Brazil’s problems will draw on the power of Brazil’s most precious asset: its people. Since they are the ones who will innovate to make possible a more advanced, more equitable Brazil.

Leaving the breakfast meeting, Furtado was struck by Lemann’s bold and straightforward answers and the simplicity and elegance of his thinking. “The Lemann Foundation carries that vision for commitment to transformation and making this planet a better place but with people at the center,” he said, adding that there are, however, also nuances.

”I think processes and indicators need to be put into context or combined with impact and other more key elements such as diversity, equality, and inclusion,” he added.

Pathways to Protein
Furtado’s stint at Columbia was also through the Lemann Fellowship. Not an academic and applying during the pandemic period in which the number of applications had doubled, Furtado didn’t think he had much of a chance. It’s an understatement to say he was surprised when he got an invitation from the Institute for Latin American Studies at SIPA to attend in the fall 2021.

“I realized although indeed I lacked the academic background, I believe a strong reason for my selection was the work I had done on climate change that combined environmental and social issues,” he said.

It was his first day on campus when he attended, at the invitation of Prof. Walter Baethgen, an interdisciplinary session of the Sustainable and Healthy Food Network. He was chosen to present a food systems idea he had worked on with the group at his table, which included climate, agriculture, and nutrition experts.

“I thought, ‘I haven't even received the key to my office yet, I can’t go up and present this.’ Then a woman next to me said, ‘Go on present it, you are in a safe space.’ It turned out she was Ruth DeFries, the co-dean of the climate school,” Furtado said.

It turns out Columbia was then working on setting up a climate school that comes at the issue from a holistic manner by having all the critical disciplines related to climate change under one umbrella including education, law, business, public health, and others, related to climate.

“This has not been done anywhere else,” Furtado said. “This is a very interesting moment to be here!”

His plan is to work on a solution-driven approach to food systems called “Protein Pathways for Humanity” that brings together colleagues and research from both the public health and climate disciplines. In order words, to seek solutions for the nutrition issue addressing inequality and health in an earth-friendly way. “It’s not common that you have these fields combined,” he said.

To address the Climate Crisis we need to engage in three critical transitions for society, Furtado explains. The energy transition is about how to replace the current fossil fuel base with a renewable energy base. The urban transition brings new materials and approaches to how we live in our cities. Finally, the food transition is about producing and consuming food differently. The cultivation of animal protein takes a huge toll on the planet and society will need to engage in a diverse and decentralized production of alternative proteins.

“Brazil is one of the largest food producers on the planet and therefore needs to be engaged in the conversation,” he said. “We also need to make sure companies and organizations that work within the food system are prepared and willing to engage in this transformation of the food system as we know it to deliver a healthy and sustainable for all.”

Furtado said the experience of being in New York with his kids (19 and 24 years old), relying on walking or public transport for mobility, enjoying a city that is learning to reopen, and the possibility of seeing people in flesh and not on a computer screen was “nothing short of fabulous.”